Facebook
Twitter
Pinterest
WhatsApp
Recently the social network giant, Facebook has rolled out a new feature which will enable users to reply on comments on fan pages and popular profiles. We are already posted a complete tutorial about activating reply-to-comment feature on Facebook for fan pages. Obviously, this feature will helps to increase interactions with fans and readers.
The working of threaded comment system is a little more sophisticated than simply putting the comments with the most replies at the top, and ties in with how Facebook generally prioritizes content for you based on your own social network and likes. So, the problem is that comments are won’t show in chronological order.It’s becoming an annoying feature, makes confusion among users.
After the roll out of the feature many page admins and users asked me to write an article about disabling reply to comment feature. I think they are right, even though it will improve the interaction, its making a bit confusion among readers. Almost users are not aware of this new threaded comment system, they are commenting on others comments as reply. So, we decided to write an article about turning-off threaded comments on fan pages.

How to De-activate Reply-to-Comments feature:

Reply to comments system can be easily disabled by following these simple steps: 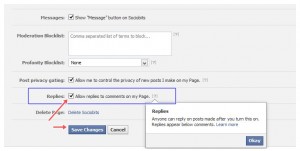 Once you disable it, will be not shown for new posts/updates, it won’t be activated for existing published updates with reply.