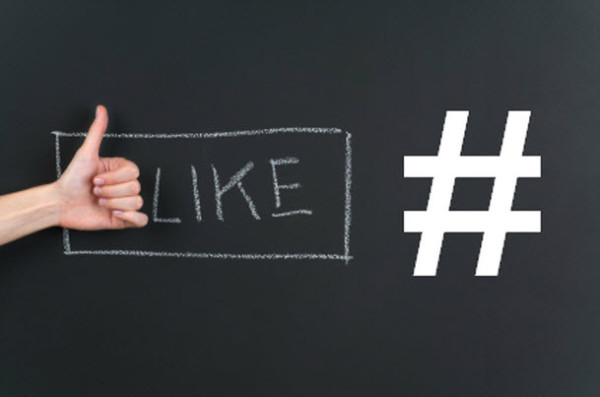 The rumors are now real, finally Facebook introduces ‘hashtag’ support to its newsfeed. Any phrase with the ‘#’ (hash) symbol before it would become clickable. Users can put hashtag in their status update or comment, it connects it to others talking about the same thing.

What is a #Hashtag?

A hashtag is a unique strategy for categorizing various messages, it consists of words or phrases (with no spaces), preceded by a ‘#’ hash sign (Eg: #Facebook or #NBAFinals) that is used to tie various social media posts together and relate them to a topic. Topics may be connected to an event, TV show, sporting event, or any happening or trend of your choosing.
Hashtags have been popping up on almost social networking sites and most likely, you’ve seen them on Twitter, Pinterest, Instagram etc.
There are several benefits that come with using hashtags. These can be used for business or causal purposes to increase awareness, as well as improve reputation online.

During primetime television alone, there are between 88 and 100 million Americans engaged on Facebook – roughly a Super Bowl-sized audience every single night. The recent “Red Wedding” episode of Game of Thrones, received over 1.5 million mentions on Facebook, representing a significant portion of the 5.2 million people who watched the show. And this year’s Oscars buzz reached an all-time high on Facebook with over 66.5 million interactions, including likes, comments, and posts.

To date, there has not been a simple way to see the larger view of what’s happening or what people are talking about.

To bring these conversations more to the forefront, we will be rolling out a series of features that surface some of the interesting discussions people are having about public events, people, and topics. As a first step, we are beginning to roll out hashtags on Facebook.

On the blog post they also added how we can use hashtags,

Facebook users can also search for a particular hashtag from the search bar by prefixing # sign on the keyword.

However, unlike Twitter or Instagram, Facebook’s privacy settings make this feature unique. If you have selected ‘friends only’ while posting a status, only those people are allowed to see when clicking on the hashtag. Which means, if you clicked any hashtag link it will bring public posts as well as posts from your friends who have allowed to see the post.

Here’s what happens when you hashtag something on Facebook.

When a hashtag is clicked, either in a post or a comment, users can then see the whole conversation about the same topic from all around the world in a lightbox window.
Users can also see a status update prompt at the top of the discussion, so they can participate by adding their own words. 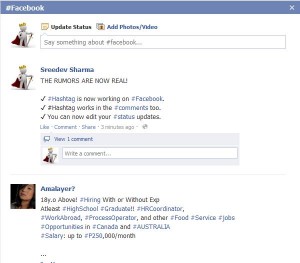 What do you think of Facebook’s hashtags functionality? Let us know in the comments section below:
- Advertisement -
Share
Facebook
Twitter
Pinterest
WhatsApp
Previous articleFacebook Now Allows You to Send Photos in Chat [How-To]
Next articleFacebook Now Lets You Attach Photos In Comments [How-To]
RELATED ARTICLES
News