Now you doesn’t need copy and paste photo’s links into comments. Facebook has made the ability to attach photos directly to your comments.

The social network has started to roll out the new feature yesterday, which will enable the user to pepper comments with photos in both mobile and desktop web versions 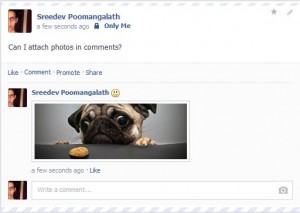 To use this feature you need to click on the small camera icon beside the response field where you write text comments.

The photos you commented are viewable to desktop as well as mobile users. Clicking the photo will bring the photo-viewer where you can see the image in high resolution, but there will be no like or comment buttons. Attached photos are moved to a hidden place which is not appear in your photos section.

Recently the social network has brought many innovative changes in conversion. Introduction of Reply-to-Comments and the support of emoji — a standardized set of smileys, in comments are examples of them. Definitely this ‘photo comments’ feature is a major breakthrough in conversation building on Facebook.

Let us know your thoughts about the new feature in the comments.