Facebook’s network feature, one of the oldest feature in the platform, is looks like gone forever. Users are not able to join a network and even taken down from user profile pages.

Network feature was a part of Facebook for long years, and it’s used to connect people who have similar backgrounds, interests, hometowns or workplaces. This feature allowed users to easily identified and connect with past and present co-workers or classmates. 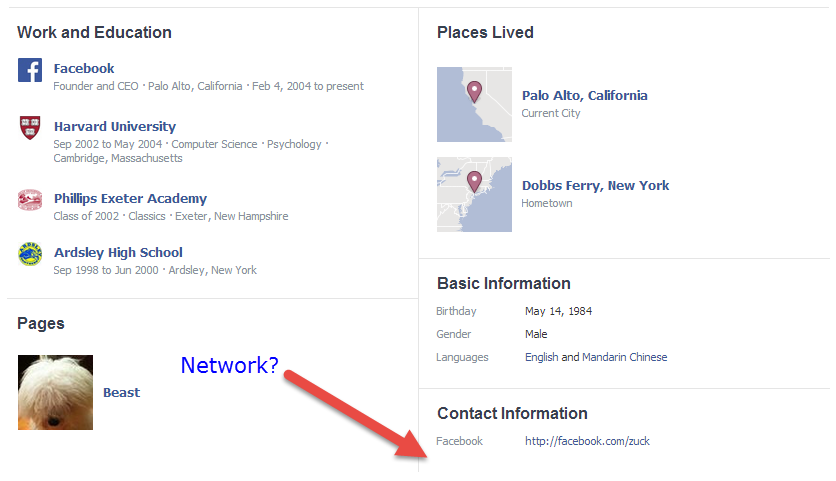 The network label was visible in the about section of the user profile, now it’s completely gone. As you know, the CEO of Facebook, Mark Zuckerberg, is a member of Facebook network and now it’s hidden. I checked many other popular profiles too, none of them showed their networks. So, it might be a hint that Facebook is retiring from network feature. But, interestingly, still there is ‘Networks’ option in the Settings (without ‘Join’ tab).

Facebook had stopped accepting new network creation requests in 2011, though users can join or leave from existing networks. A Facebook employee had confirmed the same and recommended to create public groups instead of networks on a discussion in Quora.The main purpose of a network has been “phased out”, the feature replaced by groups and fan Pages. They do same or more functionality than networks. So, if they really shuts-down the network feature, it would be a fine decision taken by the company. In the modern Facebook there is no relevancy in such features. Top image: iStockphoto/enjoynz

Facebook To Kill Its Email Service; New Emails Will Be Forwarded To Your Primary Address

When you put your heart and soul into creating...
- Advertisement -
Previous article
Facebook Users Can Now Select ‘Custom Gender’ Beyond Male or Female
Next article
Facebook’s New Service Aims To Help UK Flood Victims With Volunteers