Also Read:  5 Trends That Will Shape the Future of Social Media
Home social media The Big Boys Leading The Way When It Comes To Marketing
Facebook
Twitter
Pinterest
WhatsApp 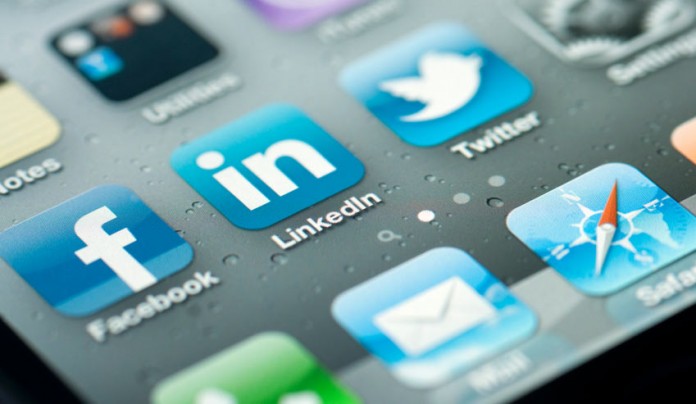 You’d have to have been living in a cave not to have seen how much brands are using social media nowadays. You certainly wouldn’t be reading a site dedicated to social media. But the fact is, they are, and more so than ever before, not sticking with simply Twitter and Facebook but making moves on the likes of Twitch, Meerkat, and Vine.

For some brands it doesn’t quite work, as they haven’t quite got their tactics right, but others have become must-follows and fine examples on how to make the most of social media campaigns and boost their profile.

The world’s biggest names are coming up with incredibly inventive ways to get themselves trending and have their content shared by thousands of people.

From the gambling industry to sports brands, to biscuits manufacturers; every niche is doing all it can to get to the forefront. But which brands actually are?

We’ve selected a handful of brands who are taking their social media accounts to the next level, and other companies wanting to get ahead should take note…

Oreo has earned over 700 thousand followers through their ground-breaking, fun, and incredibly engaging Tweets, and have provided huge insight into how to do social media properly.

Not only that, but they helped set the bar when it comes to live tweeting.

Which is the point where we will start. During the Super Bowl in 2013, when the San Francisco 49ers took on the Baltimore Ravens at the New Orleans Superdome, Twitter was going into overdrive. Brands were doing all they could to stand out in a world where second-screening is a part of our everyday lives.

But one tweet stood above all others, and that came from Oreo. During the third quarter a

But one tweet stood above all others, and that came from Oreo.

power cut sent the Superdome into darkness. Of course, jokes spread across social media quicker than a Colin Kaepernick rush, but it was Oreo that continued to be discussed, and two years on is still cited as one of the finest examples of marketing around.

But one tweet stood above all others, and that came from Oreo. 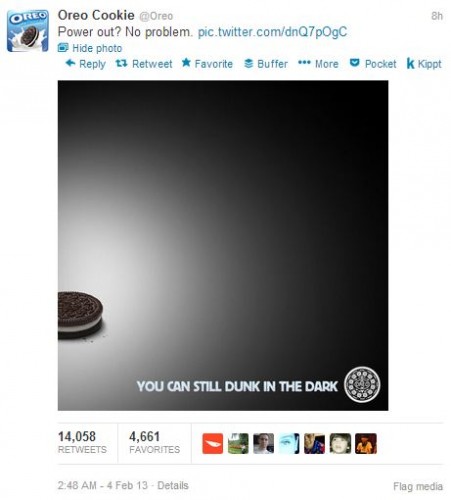 During a game where it costs millions to advertise – in fact Oreo themselves spent a hefty sum to advertise – it was a mere tweet which gained the biggest response. Tens of thousands of people retweeted the image (pictured), yet it only took a matter of minutes to be designed, captioned, and approved.

Also Read:  How To Get The Most From Your Social Media Advertising Budget

They continue to do that today, earning hundreds of retweets and plenty of engagement with almost every tweet.

Whilst PokerStars’ Twitter and Facebook feeds are incredibly popular, they’re also taking things in a new direction entering the world of Twitch.

The live video streaming platform is the fourth highest trafficking site in the United States during peak times and attracts around 100 million visitors per month. So naturally, brands can reach a pretty big audience.

One of the more popular types of stream, alongside the likes of StarCraft and World of Warcraft, is poker, and PokerStars have recognised this.

The brand has signed up both Jason Somerville and Jaime Staples, both regular streamers, reaching a new, wider audience. 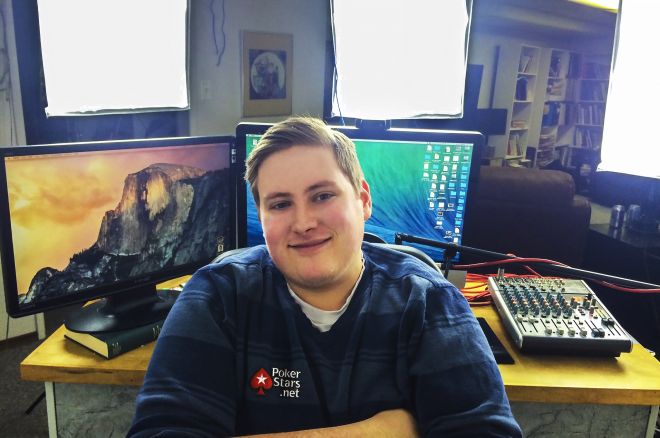 It’s a big move from PokerStars becoming part of the Twitch make-up, where there is a fantastic community and one beneficial to their players.

Both Somerville and Staples are big names in the world of poker, so getting a look and insight into how they play, how they think, and their general gameplay is incredibly useful to becoming a better player, not to mention entertaining.

Social media is of course all about sharing, and PokerStars is beginning to play a big part in it via Twitch.

Another brand which isn’t using the typical social media platforms is IKEA. Naturally they are still very engaging via Twitter and Facebook, but it’s Pinterest where they stand out above the rest.

Of course, Pinterest is a great tool for any homeware brand, and has a large community surrounding the industry. And IKEA has taken full advantage.

Not only does the brand showcase their range, but also offer tips on how to present their furniture, where to put it, and plenty of quick tips too. 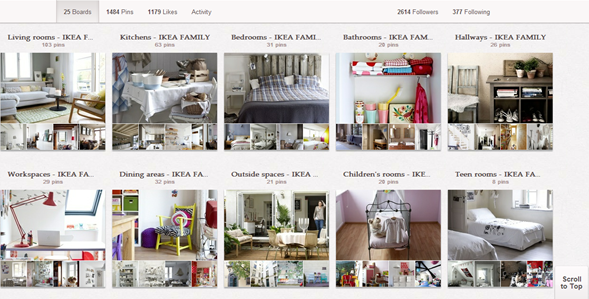 What all successful accounts do is offer something beyond simply selling a product. For PokerStars that’s insight, for Oreo it’s entertainment, and for IKEA that’s ideas and guides. On their UK page that even involves recipes for food.

And of course if you offer something useful, it gets shared.

When the prime purpose of your business is photography it makes pretty good sense to work hard on your Instagram account. And this is exactly what GoPro has done. The brand is little over a decade old yet has come right to the forefront of the photography industry. Of course, that’s in the main to producing excellent products, but their efforts on social media shouldn’t go unnoticed.

What they do effectively is show off their product, but in a fun and engaging way. Rather than uploading photos themselves, they showcase ambassadors’ and photographers’ images that have been taken using one of their products.

What they do effectively is show off their product, but in a fun and engaging way.

Their Photo of the Day images often earn hundreds of thousands of likes and give recognition to budding photographers all around the world. The campaign, which allows users to submit photos on their site, not only shows off the images but will inform followers (all 5.9 million of them) which of their range was used to snap it. 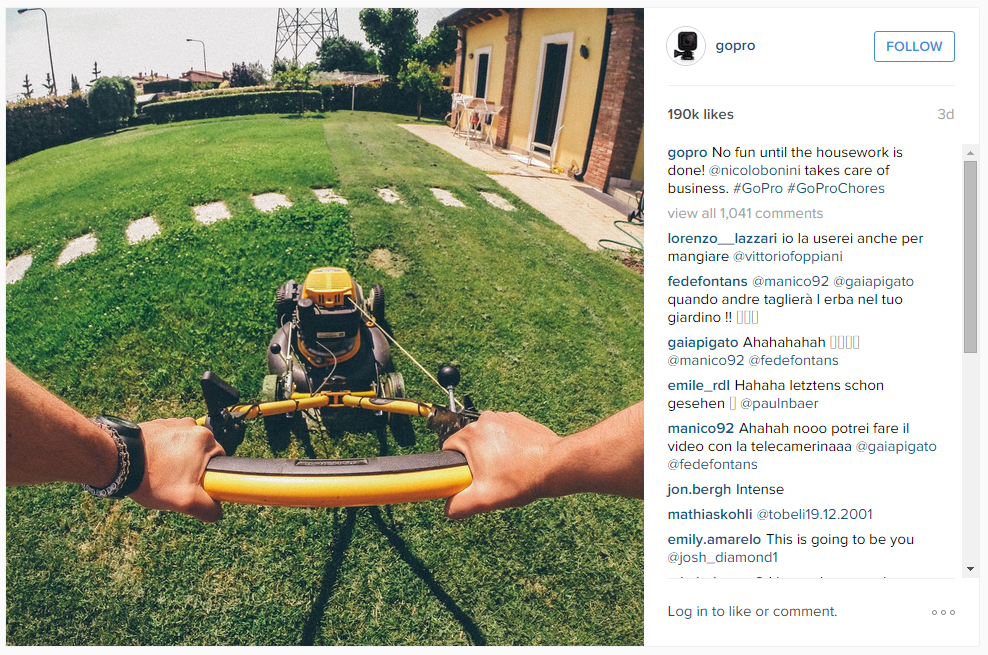 Its use is a brilliant way to show off the brand on a social media platform which is all about imagery; it paints much more than a thousand words, converting into sales.

The account has been hailed by industry experts, even winning Best Instagram account at the Shorty Awards thanks to their continuing rise in engagement and growing number of followers.

Unlike the other brands, they aren’t exactly selling a product, but rather a sport. Across all major sports no association is impressing as much as the NBA. They introduced Instant Replay Center to @NBAOfficial last season providing a unique insight into how referees make in-game calls. 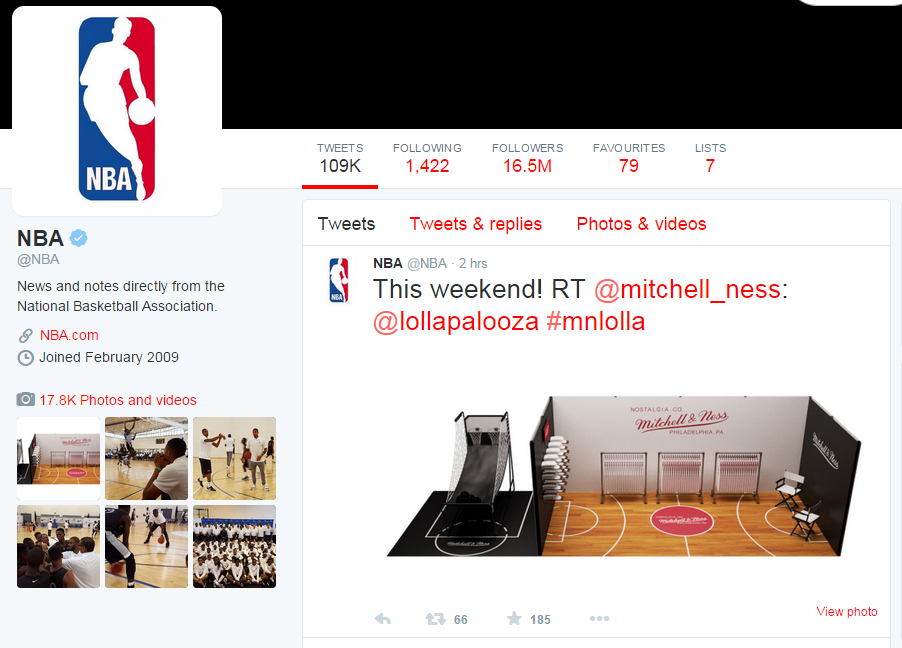 Nothing like this has ever been done in sport before and is truly innovative, which is shown in the sky-rocketing of followers for the account.

It includes video and an explanation on the foul for fans, and with a new season on the horizon, it will no doubt go from strength to strength.

Additionally, their regular account is also a great example of how to use social media. Engaging with a number of other businesses as well as integrating all their channels such as Vine and YouTube, to create one of the most engaging feeds out there. 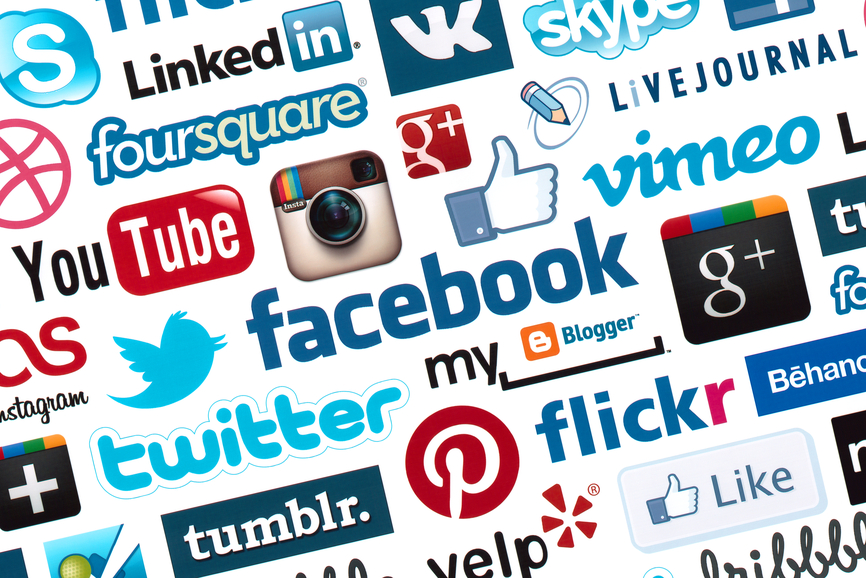 Of course, there are plenty of other brands doing great work on social media too, but the ones featured above continue to break boundaries and encourage users to engage with them every day.

It’s no real surprise they’re some of the most recognisable brands on the planet. And they likely will be for some time to come. Marketing and social media gurus, take note…