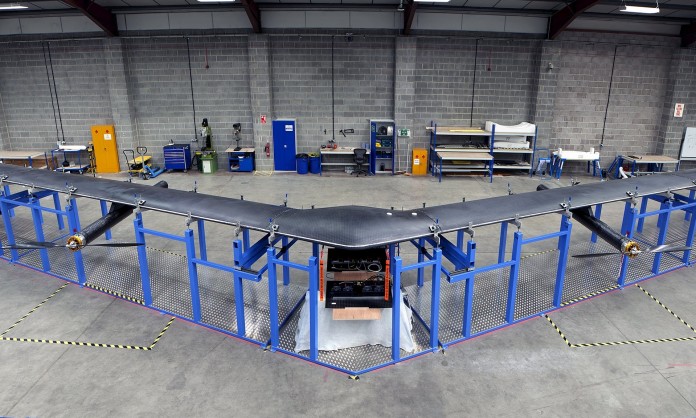 In a watershed development in the field of technology, social networking giant Facebook has launched a fully solar-powered drone designed to provide internet access in remote areas across the globe. The drone plane, Aquila, has the ability to fly for a period of three months at a stretch and is equipped with laser beam technology that will help in relaying data connection to its base stations. In order to provide a systematic internet connection worldwide, Facebook intends to use a large network of inter-linked drones that will stay afloat over different parts of the world.

According to the company’s engineering director of connectivity, the drone has the ability to fly at an altitude of 60,000 to 90,000 ft, which is a lot higher that the altitude reached by commercial planes, thereby ruling out the risk of the internet access drones interfering with usual aviation activity. Another key benefit of flying the drones at such a high altitude is that it rules out the incidence of its operations being hit due to adverse weather conditions. Aquila, which is all set to be tested later this year in the US, has been built over a span of 14 months.

Though it has a wingspan corresponding to that of a Boeing 737, Aquila comes without any wheels and lacks the ability to take off and cruise to its desired altitudes without assistance. A bunch of helium balloons will, thus, be used to get the drone up and flying. Even with the full load of its communication equipment, the drone weighs around 400 kg, making its lift with the help of balloons feasible. Since the drone needs to remain in motion to stay at its desired altitude, the planes would hover around continuously within a 3-km radius. The testing phase for drone Aquila in the US is likely to be a smooth ride as there are no policy hurdles or legal issues involved at this stage. However, considering the altitude the plane is intended to fly at, a set of clearly defined policy guidelines will need to be drafted before its actual launch.

In statement on the launch of drone-based internet access services, Facebook’s vice-president of engineering, Jay Parikh, said that the company’s mission was to take internet connectivity to everyone in the world. The company hoped that this initiative would serve as a motivation for others in the industry to take this enterprise forward, he added.

Just like the internet.org initiative launched by the company a year ago, even in the case of drone, Facebook will be dealing with local ISPs instead of individual customers. Although drone-based internet access initiative is the first-of-its-kind, it is not one without stiff competition. Facebook’s flagship Aquila venture is likely to face direct competition from Google’s Project Loon. Developed on similar lines, Google’s internet-access program uses transmitter-fitted balloons instead of drones.

How well Facebook’s new initiative fares in terms of performance, handling competition, and widening internet outreach remains to be seen. One this that can be said with certainty is that this giant leap in technological innovation could well be the first step in the direction of revolutionizing the industry.

Why Online Dating Sucks and Doesn’t Work At All

How to run your social media like an agency