The social network giant is testing a revamped layout for its Timeline among select users in New Zealand, It has a refreshed About section on the left panel as well as a new sub-menu that includes ‘Friends’, ‘Photos’, ‘Maps’ and ‘Likes’ boxes.

This design tweak oraganizes posts in a single column instead of double-column layout, and adds user’s info in a box on the left panel. There is also an updated publisher box that looks a bit more modern than the existing design.  Overall, the header portion of a user’s Timeline is more monochromatic than the older design. 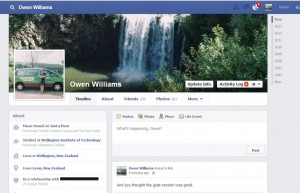 A Facebook representative told CNET that “this is a new design Facebook is testing with a small percentage of people to make navigating Timeline even easier.”
According to The Next Web report, the trial is available for a select number of users in New Zealand. The new tweaked Timeline is bit different from the profile redesign that was tested earlier this year. 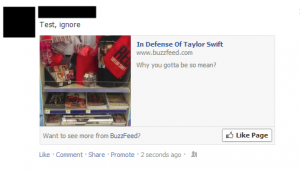 Another image caught by TNW shows a new feature associated with posted links and Facebook Pages. There’s a new Like Page button under a status update from BuzzFeed links to an article. This link allows users to like their official Facebook page.

There’s no idea on when, or if, this new Timeline might roll out for other users. Assuming the test phase goes well in New Zealand, Facebook will undoubtedly start rolling out the Timeline tweaks to the rest of the world soon.