From Jemma to Jemmaroid…all for the love of Facebook 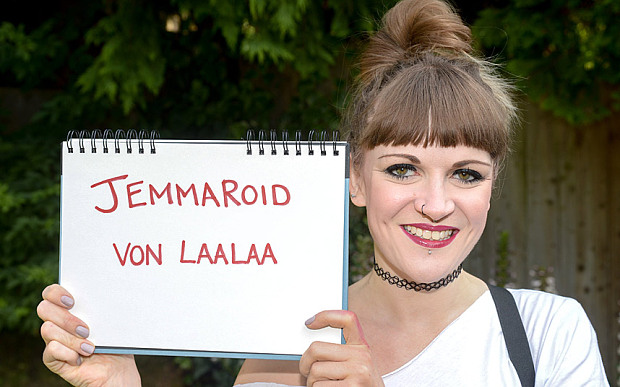 Her name is Jemmaroid Von LaaLaa and she is not joking about it!

The things people do for the love of social networking!

Formerly known as Jemma Rogers, 30, Jemmaroid recently changed her official name to this pseudonym which she had been using on Facebook for the past 6 years. Jemma set up her Facebook account in 2008 under the name of Jemmaroid Von LaaLaa as she didn’t want to experience the awkwardness of rejecting friend requests of acquaintances she didn’t want to befriend on the social networking site. Up until recently, everything worked splendidly until one fine day the ‘FB thought police’ detected something abnormal in her profile name. As a protocol, Facebook insists that users use their own names on their profiles as it would make them accountable for what they say.

So obviously, Jemma was asked to share identification to prove that she is in-fact Jemmaroid. In a desperate attempt to keep using her Facebook account, Jemma Photoshopped some of her IDs and sent them across. Within 24 hours she was locked out of her account and was informed that her identity couldn’t be established. As would be the case with any Facebook user, being locked out of your account could be a panic inducing incident. So even Jemma, a holistic therapist, couldn’t contain her panic and promptly reached out to the Facebook team and informed them that she had used a pseudonym and sent across fake IDs to continue using her account.

After getting “We’ll look into it” auto-generated responses and no activation of account for weeks, Jemma decided to take matters into her hand and using Deed Poll officially changed her name to Jemmaroid Von LaaLaa. While she is stuck with the ridiculous pseudonym, it still took Facebook sometime to reactivate her account.

A company official commented that “In this instance we made a mistake but we reactivated the account last week. We apologise for any inconvenience that this caused.” But while the company has conveniently moved on from the incidence in the name of company policy, Jemmaroid is not sure whether she taught Facebook a lesson or learnt a strange lesson herself.