Facebook has just announced an expansion to its gender selection field, users can now select custom gender. Previously, users had been limited to either male or female, or simply not displaying any gender information on their profiles. Now, users are able to pick a custom label and specify what pronouns they would prefer to be referred to: him, her, or they.
Currently, this is only available to users who view Facebook in U.S. English.
Facebook released a statement through its Facebook Diversity page on a “new custom gender option to help you better express your own identity” on the social networking site. Here’s the full text:

When you come to Facebook to connect with the people, causes, and organizations you care about, we want you to feel comfortable being your true, authentic self. An important part of this is the expression of gender, especially when it extends beyond the definitions of just “male” or female.” So today, we’re proud to offer a new custom gender option to help you better express your own identity on Facebook.

We collaborated with our Network of Support, a group of leading LGBT advocacy organizations, to offer an extensive list of gender identities that many people use to describe themselves. Moreover, people who select a custom gender will now have the ability to choose the pronoun they’d like to be referred to publicly — male (he/his), female (she/her) or neutral (they/their).

We also have added the ability for people to control the audience with whom they want to share their custom gender. We recognize that some people face challenges sharing their true gender identity with others, and this setting gives people the ability to express themselves in an authentic way. 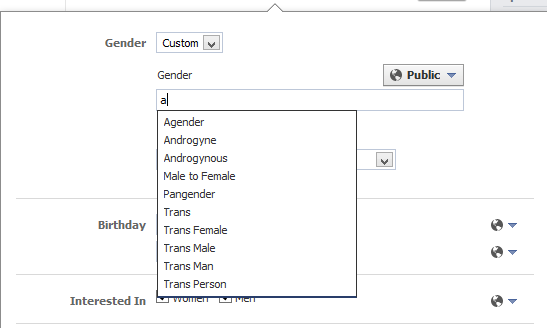 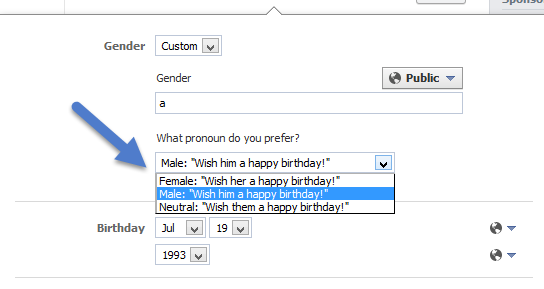 You can change your gender by heading into the settings menu on your About page and clicking on the gender options. Besides male and female, you’ll see an “Other” option. Then, select a gender identity from a variety of pre-listed options (e.g. Agender, Male to Female, Androgyne, Cis Man, and Pangender) that appear once a user begins typing. You can also change the pronoun you prefer, select him/her/them.
Also Read:  Facebook Testing Temporary Profile Pictures