Facebook Messenger is getting more visual oriented as the recent update adds instant video sharing capability. With the updated Messenger app users can now send 15-second video messages to their friends instantly after recording it.

To use the latest instant video sharing feature you have to tap and hold camera icon, and the videos will be send to the recipient as soon as you release it. By default the active camera will be the front-facing, but you can flip it around to show off what you’re seeing. 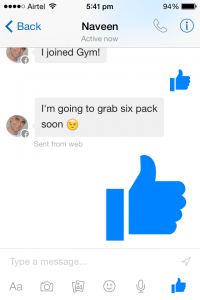 Facebook also packed another cool feature with this update, ”Big Likes“.  When you really, really like something you can send bigger thumbs up as replies.  You can send ‘big like’ by pressing and holding the “Like” button. But if you hold it for long time, it will blow-up automatically. It’s really a playful feature, the animation and the sounds are great.

The latest update is available on both iOS and Android platforms.  iOS users can download the new Facebook Messenger Version  6.0  from the iTunes. And Andoriod Version is available at Google Play Store.

Also Read:  A Tour Of Facebook's Home On Android

Top 12 Android Apps That You Should Check Out

How To Activate WhatsApp Calling Feature on your Android