People on and of social media stood up for Ahmed and his clock. Social media took on discrimination when he was arrested unfairly. 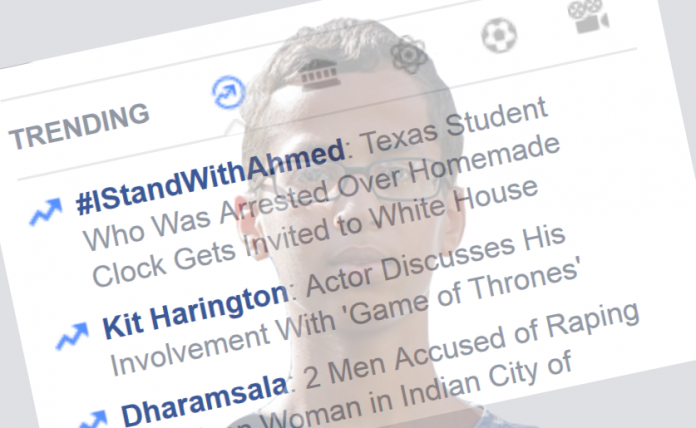 It is easy enough to say that just Tweeting something or sharing a post is easy. It doesn’t have a real world impact of any sort. It’s just taking the easy way out.

That might be true, sometimes. But social media is not something separate from real life. It is very much a part of real life, a part of your identity, how you spend your time and something that impacts you in very real ways. If you want to see how social media can make a huge difference, here’s the story of Ahmed, a 14-year-old Muslim kid in Irving, Texas, USA.

What happened to Ahmed Mohamed:

This 14-year-old student loves taking things apart and putting them back together again. He wants to invent things. He loves tinkering with all things mechanical and electrical, including making his own Bluetooth radios, speakers, and a lot more. One of the things he made recently was a clock. Can you make a clock? I know I can’t. He made a clock, and he took it to school to show his ninth-grade teachers. He hoped they would be pleased with how much he had learnt.

But they weren’t pleased. Despite his repeated explanations that it’s a clock, they refused to believe him. They called the police because they thought it was a bomb. The police came and handcuffed him, arrested him, and took him to a juvenile detention centre. He was wearing a NASA t-shirt when he was arrested. Remember, this is a kid with absolutely no background of any violence – his school counsellor, he said, looked shocked because she knew he was a good kid. But he’s a brown Muslim kid named Ahmed Mohamed, and he brought a clock to school. Or science teachers in that school really don’t know what a time bomb is.

And so the hashtag was born:

It was being tweeted up to 2000 times a minute once the news really made the rounds on social media. Everybody got involved. South Asian people in the US have taken photos with clocks and posted them. Some of the biggest names in programming and science have invited Ahmed and his family to come and see what they do. Social media stands with Ahmed and his clock.

Anil Dash started the ball rolling, and everybody kept it going:

If any of our early geek experiments had gotten the most terrifying response possible from teachers & police, would we have kept doing it?

He has been invited to watch the Mars Rover, to take tours of Google, of Facebook, of Reddit – even to bring his clock to the White House. Nerds of the world have united to tell him that he should keep it up, and this young kid has taken it to heart. Zuckerberg took to Facebook to tell him to keep going, and that he’s welcome at Facebook. He is being offered internships already (that is Twitter, via Twitter). After being released, he said that kids like him, who face discrimination like he does, should never change.

The police department will also be sued because they broke all rules and procedures, handcuffing a minor and interrogating him without a guardian present, all for building a clock and taking it to school. In contrast, remember that Dylan Roof, who shot people in front of witnesses, was positively treated with courtesy when he was arrested.

Tumblr, Facebook, Reddit and most importantly, Twitter, all came together to show that when you make a lot of noise and stand with somebody in solidarity, even if only on social media, it makes a difference.

It’s time to stop thinking of social media as some kind of odd thing separated from real life. Social media is part of real life. This proves it.