Also Read:  The Darkside of AI text-to-image generators like Craiyon and DALL-E

Also Read:  DALL-E 2: Open AI's tool that is revolutionizing digital photo creation
My account
Get into your account.
LoginRegister
HomeNews 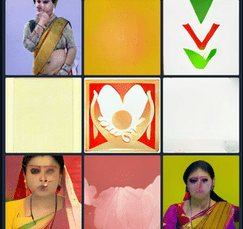 Everyone who is pretty active on the internet must have come across the viral memes being made on DALL-E Mini also known as Craiyon, a viral text-to-image tool that can make most of your imaginations come true.

For the past month, people have used this AI model to create hysterical memes ranging from controversial topics to a baby from the Victorian era hitting a vape, the possibilities are endless. You must simply go to the website, type anything you can think of, and press enter. But what happens if we just press enter without typing anything?

The Rest of World also had the same question as us. They became fascinated with this thought and hit the search button again and again without typing anything. In a bizarre chain of events, DALL-E Mini (Craiyon) was throwing pictures of women in sari’s at them. They continued to try as they thought it was a glitch and this kept on happening every time.

For the unversed, Sari is a piece of clothing that women from South Asia wear. A sari symbolizes a traditional woman in many cultures, including our own.

Right now we don’t have any concrete answers to explain why this phenomenon happens. According to a few AI model researchers, the reason behind this might be incomplete data sets and tagging. This is a guess that people are making as no one is really sure. According to a report from the Rest of World, even the developer of DALL-E Mini, Boris Dayma, seems to be scratching his head in confusion.

It’s pretty interesting and I’m not sure why it happens. One possibility is the potential high representation of this picture in the datasets, maybe with small captions.

DALL-E 2 can be called the elder brother of this new software. DALL-E 2 can also have its fair share of controversies, most importantly the fact that how easy it would be for people to create scandalous images and circulate them as being real. Keeping this in mind, OpenAI tackled this by providing exclusive access to the app, only for 400 AI researchers.

Taking heavy inspiration from this, Dayma felt like creating an AI platform that is not restricted to a select few people. He envisioned an open-source platform, which can be used and improved by people. Recently, DALL-E Mini got rebranded as Craiyon. Comparatively, DALL-E 2 produces far better quality pictures but the accessibility to Mini has created an entire sub-culture of memes and wacky pictures on social media.

The computer science community which is active on the Hugging Face Forum, a popular place for discussions on machine learning, also gave their two cents on this issue. They believe that the reason for this occurrence might be because the AI could have been trained on multiple pictures of South and Southeast Asian people. These pictures lie in the ‘unlabeled’ section in the data they collect and show up for the same reason when a blank space is being searched on the AI tool.

Wondering how will the last selfie on earth look like? Here’s what DALL-E 2 suggests

Google fires the employee that claimed its AI chatbot is sentient

Wondering how will the last selfie on earth look like? Here’s what DALL-E 2 suggests

Google fires the employee that claimed its AI chatbot is sentient